Ion Transport between Electrolyte and Electrode

Diffusuion in the Boundary Layer

Adhesion to the Electrode

Cations are always hydrated in aqueous solutions, i.e. they are surrounded by a hydrate shell from the water molecules due to the ion-dipole interaction. This shell must first be stripped before the cation can attach to the cathode.

A Closer Look at the Diffusion Boundary Layer 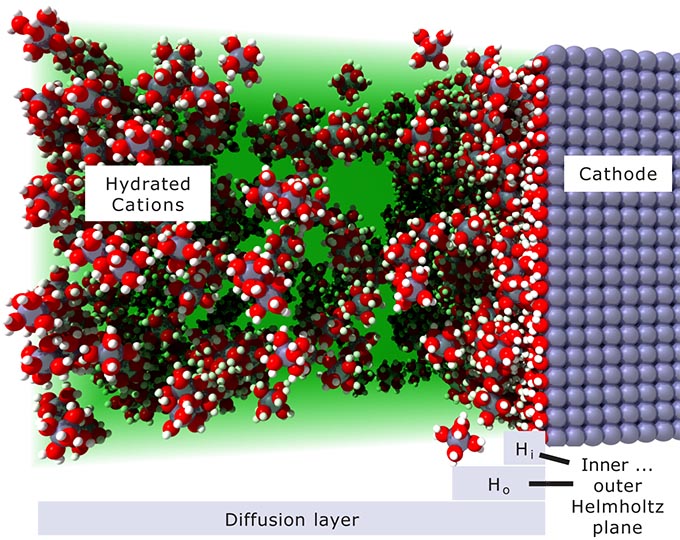 After the cations have reached the cathode and have stripped off their hydration shells, they are initially loosely bound as adatoms to the surface of the solid. They can diff use thermally activated there until they are permanently incorporated into the crystal structure at an energetically favourable place.

The following simulations illustrate the mechanism of attachment and incorporation of a cation into the solid state in a simplified manner: Each particle in a cubic lattice has 26 neighbour sites (6 over the sides, 12 over the edges, and 8 over the corners of the central cell), each of which can be occupied or unoccupied. The more occupied neighbour sites a particle has (the neighbour sites contributing less to the edges and corners due to the greater distance), the greater its bonding energy at this location. The probability p for a thermally activated jump from a lattice location (energy E1) to an adjacent location (E2)) is thus:

where kT is the kinetic energy of the particle, and c is a constant. The series of images below shows the growth of a layer simulated exclusively by this model, monolayer by monolayer, at different stages:

In our simple model, deposition starts with i) the physical adsorption of ions on a random site of the solid, ii) thermally activated jumps to energetically more attractive crystal sites with more neighbours and iii) finally the incorporation into the growing crystal. The colouring of the different layers aims for a better visualization.

The more time the deposited particles have for the search for an energetically best possible lattice site (for example, a lower deposition rate and/or higher temperature), the smoother the layer grows (see figure below).

A slower growth rate (left) lead to smoother deposits, since the adsorbed atoms have more time (more jumps between different sites) to find a crystal site with a maximum number of neighbours. The colouring of the different layers aims for a better visualization.

The reality of electro-plating deposition is much more complex than the assumptions of the simulations treated here: Electrodes are usually not single crystals but amorphous or nano-crystalline solids, whereby the bonding conditions are locally different on their surface. Also ignored were the transport mechanisms within the diffusion boundary layer, in particular the passage through the inner and outer Helmholtz layer. The stripping of the hydration shell and chemical reactions also affect the energy balance of a particle between adsorption and incorporation into the crystal structure.