You are here:
Products
Photoresists

The crosslinking makes the resist thermally stable, so even elevated temperatures will not deteriorate the resist profile. However, towards higher and higher process temperatures, the degree of crosslinking increases and it becomes hard or even impossible to wet-chemically remove the resist.

Spin-coating is the most common coating technique for resists. Almost all AZ® and TI resists are optimized for spin-coating and allow very smooth and homogeneous resist films. The attained resist film thickness goes with the reciprocal square root of the spin speed and thus is adjustable in a certain range for each resist. However, since the edge bead becomes more pronounced towards low spin speeds, for attaining thick films we recommend to use highly viscous resists such as the AZ® 4562 or AZ® 9260, as well as suited spin profiles.

Spray coating allows the coating of almost arbitrary shaped and textured substrates. In order to attain a smooth and homogeneous resist film thickness as well as a good edge coverage of textures (if existing), an optimized resist composition with different solvents with low and high boiling points is required. The spray coating resists AZ® 4999 and TI Spray meet these requirements for almost all spray coating applications.

Dip coating is a suited coating technique for large, rectangular shaped substrates and the demand for a minimum resist consumption per coated area. For a homogeneous resist film thickness over the entire substrate, a certain solvent composition in the resist is required as realized in the MC Dip Coating Resist.

Fields of Application of the Resist Mask

Lift-off processes recommend an undercut resist profile which can be attained with image reversal resists such as the AZ® 5214E (resist film thickness 1-2 µm), the TI 35ESx (3-5 µm), or the AZ® nLOF 2000 (2-20 µm) negative resists. Additionally, these resists are thermally stable and therefore help to prevent a rounding of the resist structures during coating.
If the mask design requires positive resists for lift-off application, the resist sidewalls should be as steep as possible in order to prevent a coating of these sidewalls. For this purpose, we recommend the high-resolution AZ® 701 MIR 14cps or 29cps resist.

Electroplating requires an improved adhesion of the resist to the substrate as well as an enhanced stability of the resist in the electrolyte. The negative resists AZ® 15nXT (resist film thickness 5-30 µm) and AZ® 125nXT (up to approx. 150 µm) are optimized for these requirements. Both resists can be developed in TMAH-based developers, wet-chemically stripped in common removers, and are compatible with all common substrate materials and electrolytes for Cu-, Au-, and NiFe plating. If positive resists have to be used for electroplating, the AZ® 4500 series and the AZ® 9260 allow steep sidewalls and a good adhesion. 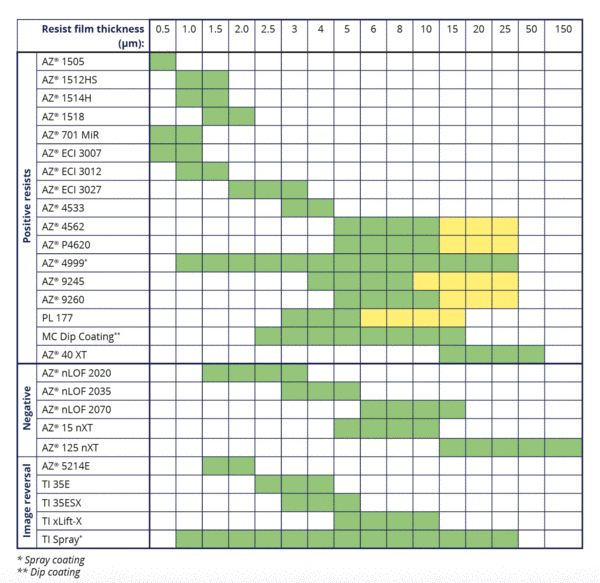 Generally, the last two digits of the resist name indicate the film thickness attained by spin coating (without gyrset) at 4000 rpm in 100 nm units. The thickness approximately decreases with the (increasing) square-root of the spin speed, so a given resist allows a certain range in the attainable resist film thickness. If the desired resist film thickness can/should not be realized by varying the spin speed, the usage of a different available viscosity of the given resist is recommended. Otherwise, the following has to be considered:

Dilution of high-viscosity resists with PGMEA (= AZ® EBR Solvent) allows to perform several applications with different film thicknesses using only one resist. However, diluted resists are sensitive to particle formation with a reduced expiry date depending on the resist, the dilution ratio and the storage temperature and -time for the diluted resist. Since the particles partially consist of the photo active compound, a particle filtration before usage increases the dark erosion and decreases the development rate of the resist. For information on specific dilution recipes please contact us.

Realizing thick films with low-viscosity resists is problematic for two main reasons:  i) The required low spin speeds increase the edge bead, and ii) in case of positive or image reversal resists, the rather high concentration of the photo active compound (low optical transparency) in typical 'thin resists' requires high exposure doses for a sufficient exposure, which makes steep resist profiles hard to realize and may cause popping and foaming by N2-bubbles formed during exposure.

The photoresist itself as well as the resist film thickness limit the theoretical resolution. Under optimum conditions, high-resolution thin resists such as the AZ® 701 MIR allow feature sizes of approx. 300 nm using i-line exposure.Beside a high absolute resolution, some processes require a high aspect ratio (ratio of the feature height to their width). Modern thick resists such as the AZ® 9260 allow an aspect ratio of 6-10, and even higher values under optimized process conditions.In many cases not the resist, but the equipment and process parameters limit the attainable resolution. In order to maximize the resolution of a given resist, besides the exposure conditions (no gap between mask and resist caused by particles, bubbles, or an edge bead), also the softbake parameters, the exposure dose, and the development (developer and its concentration, development time) have carefully to be optimized.

The optical absorption (fig. right-hand) of unexposed positive photoresists ranges from approx. 460 nm in the VIS to near UV, which is matched to the emission spectrum of Hg lamps in mask aligners. This absorption spectrum causes the typical reddish-brownish colour of many photoresists. During exposure, photoresists almost completely bleach down to approx. 310 nm.Some modern positive resists such as the AZ® 5214E or AZ® 9260 are not sensitive at g-line, while most negative resists such as the AZ® nLOF 2000 series, or the AZ® 15nXT and 125nXT are only sensitive near i-line and therefore appear almost uncoloured to the human eye.The optical absorption range does not end abruptly towards higher wavelengths. Therefore, high illumination intensity (e. g. laser scribing) or -times allow an exposure also some 10 nm towards the visible part of the spectrum.Some resists such as the PL 177 or AZ® 520D are dyed which makes it more easy to inspect the coating result.

MicroChemicals distributes original AZ® photoresists in both original trading units as well as smaller sales units of 250ml and 1.000 ml, refilled in bottles under cleanroom conditions (class 10). These resists cover a huge thickness range for almost all lithographic applications based on positive and negative tone resists.

MicroChemicals develops, produces and distributes TI photoresists for special applications such as lift-off, plasma- and wet chemical etching. The individual advantages are pointed out individually.

Composition and Properties of Photoresists

Storage, Ageing and Handling of Photoresists