Overview of our Dry Films

Dry films are not coated onto substrates in liquid form, but as an already (almost) solvent-free film. While the further processing is basically the same as with liquid resists, dry films off er completely new possibilities with regard to substrate selection and processing conditions.

Due to a solvent content in the range of approx. 30 - 90%, liquid resists have a viscosity of approx. 10 - 1000 cSt, which means that they can be spin-, spray or dip coated a more or less viscous liquid, and subsequently require a softbake  to minimize the remaining solvent concentration in the resist film.
Dry films, on the other hand, are produced as solvent-free (or solvent-poor) films which can be exposed after lamination onto the substrate without a previous baking step.

Areas of Application for Dry Films

Dried films are particularly an alternative to liquid resists if the substrates to be coated have vias or generally depressions that should remain resist-free. While it is difficult to impossible to subsequently develop liquid resists out og these vias, laminating dry films automatically achieves the goal of resist-free holes.
The greater the desired coating thickness, the greater the time saved by the obsolete softbake, which is one of the most time-consuming process steps in thick resist processing.

Even if the achievable thickness of modern dry films is comparable to the thickness range attained with common liquid thick resists, few μm thin resist films for resolutions around 1 μm are so far only achievable with liquid resists.
Textured substrates can only be coated over the entire surface with liquid resists. For processes such as wet chemical etching or electroplating, when an optimized resist adhesion is crucial, it may be necessary to use liquid coatings with their basically better adhesion potential. 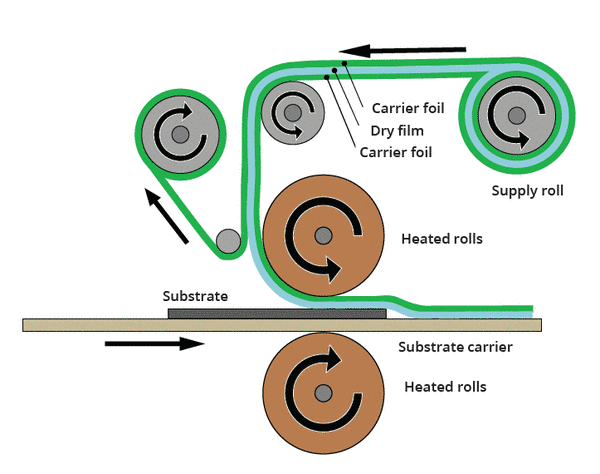 Schematic illustration of the lamination of dry films. Immediately before contact with the substrate, the protective carrier film on the substrate side is removed and the now released dry film is laminated onto the substrate under elevated pressure and temperature.

The further processing of the coated substrates is basically the same as with liquid negative resists: After exposure, the exposed areas crosslink, the subsequent development removes the unexposed resist. The remaining resist pattern may require a hardbake at elevated temperatures for adhesion improvement.

Our Cooperation with Elga Europe

As part of our cooperation with Elga Europe, one of the leading manufacturers of dry fi lms, since 2020 we can offer you an extensive portfolio of innovative dry films for a wide range of applications.
We are happy to assist you with the question of whether and which dry films are suitable for your application and which equipment is required, and can also offer test coatings.

Our typical lead time is 1-3 working days within Germany, lead times to other countries on request. On demand, in urgent cases our etchants can be shipped within 24 hours to a destination inside Germany.

Please send us your request.

Thank you very much for your interest!