Both, the greater degree of freedom (= increase in the entropy) of a metal ion in solution previously bound in the solid state, and the stronger localization (= decrease in the entropy) of the previously freely mobile water molecules bound to the metal ion during hydration, contribute to the entropy change. The two phase transitions, the dissolution of the metal atoms and their replacement in the solid state, remain in equilibrium. The potential difference between the dissolved phase and the solid state in the equilibrium state is called metal potential.

Normal Potentials and their importance

If a less noble metal such as iron (see figure below) is dipped into an aqueous solution of a metal salt (e.g. copper as a CuSO4 solution), atoms are first dissociated from the iron as ions in solution. For each dissolved Fe2+ ion, two electrons in iron remain which bond with a Cu2+ ion from the solution to elemental copper. This copper deposits as a thin film on the iron, preventing the further transfer of iron ions in solution and ultimately stopping the process of charge exchange between iron and copper. This currentless mechanism of the charge exchange is applied on an industrial scale such as in the copper-plating of iron, or the silver-plating of copper or brass in a silver nitrate solution.

Cementation: A Metal Powder in the Salt Solution of a Noble Metal

If the principle of dip deposition is not applied to a metal rod, but to a powder of a metal in a salt solution of a nobler metal, the conversion may be complete: If the size of the metal particles of the powder is comparable to the thickness of the dissolved layer or the thickness of the coating of the nobler metal, the less noble metal particles dissolve completely and until then serve as substrate for the growth of a particle of the nobler metal.

In this way, for example, elementary copper can be obtained from a copper solution or elementary gold from a cyanide gold solution with zinc dust (figure below).

If, as shown in the figure below, two different metals (one less noble than the other, iron and copper in this example) are dipped in an acid (in this example sulphuric acid), this is referred to as a galvanic element. From the time of dipping in the acid, the following electro-chemical reactions take place: From the electrode with the less noble metal, iron in this example, iron ions are converted into solution via Fe → Fe2+ + 2e-. The two electrons migrate through the electrical connection of both electrodes to the nobler copper electrode, where they form neutral hydrogen via
2 H3O+ + 2e- → 2 H2O + H2, which rises in gas form. The reaction does not come to a standstill until either the iron electrode or the acid is consumed. As long as the reaction takes place, the voltage measurable between the two electrodes is the difference between the standard potentials of both metals (approximately 0.8 V in this example), which is the basic principle of a battery. An undesirable effect of the principle of galvanic cells is electro-chemical corrosion: If components made of, for example, iron and aluminum or iron and copper are electrically conductive, the less noble metal begins to corrode as soon as the components are wetted by (e.g. rain) water. 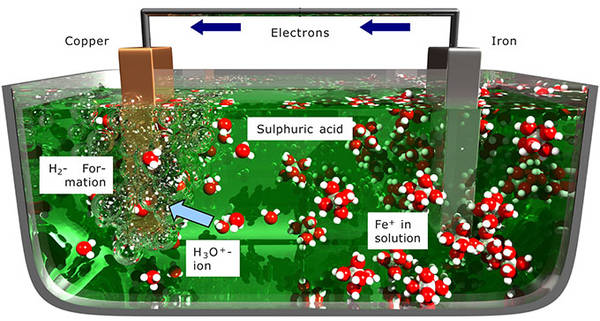